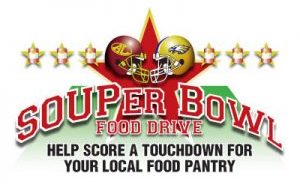 The 11th Annual SOUPer Bowl Food Drive to benefit Community Resource Services (CRS) will be held on Friday, August 28th.  The SOUPer Bowl is a friendly competition between community members in Avon and Avon Lake to see who can collect the most food by weight. All food collected will directly benefit families in Avon and Avon Lake through our onsite food pantry. We will also be accepting cash donations. Each $1 contributed will be counted as 5 pounds of food. One truck for each community will be stationed at the football field and will be weighed after the 1st quarter of the game. The winner of the food drive competition will be announced at half time and will be presented with the SOUPer Bowl Trophy.

Since its inception in 2010, the SOUPer Bowl Food Drive has collected 64,318 pounds of food and $113,064 in monetary donations.
Items can be dropped off at all schools in Avon and Avon Lake, the CRS office, or you can bring your donations to the football game on August 28th.